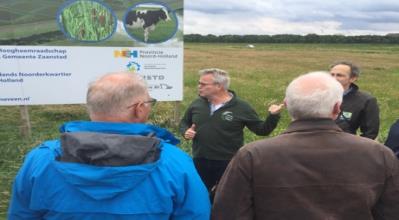 Near Amsterdam in the village Wormer the team of 15 experienced‘researchers of applied science’ came together talking over the SOSWaterfront program they see ahead. SOS Waterfront as all H2020 programs is a research program with focus om speeding-up sustainability insights by exchanging knowledge by EU people. In this program are six cities involved; all participants are interested what seawater-level rise will do to coastal cities and their people. These cities are Lisbon, Rome, Thessaloniki, Gdansk, Stockholm and the Amsterdam region. Five of these cities with the Amsterdam region as exception; are presented by a university of architecture. Amsterdam region is the only out of six non-academic founding fathers; part of the steering committee. The architecture related researchers are very anxious to learn if adaptation by designed solutions is the possible right way for creating solutions. CPONH NGO as non-academic founding-father wants to add complementary foresights to these design approaches.That’s what the CPONH participants talked about on the 4th of June. The idea is that the awareness of seawater level rise will influence the behaviour of the people of cities. Investments of households and firms will change and even migration is not excluded. The team will visit cities and do interviews; have their own personal experiences and make reports; written of pictured; cartoons and film every media tool can be used. The results will stimulate the architects and together action- perspectives for more save cities will be developed; the team will work on that in togetherness. The Amsterdam area therefor will deliver exciting examples too.

The Marie Curie program is part of the Brussels H2020 subsidized program making the EU more sustainable by exchanging knowledge byvisiting each other’s home domicile. The extraordinary of this program is that concrete results are not asked for. The idea is that professional researchers academic and non-academic in a mixed setting always create results. Following the travelling footsteps of Marie Curie (1867- 1934) the first woman honoured with the Nobel prize.

Gdansk is facing increasing problems not only due to seawater level rise; this is cumulating with the river levels of the rivers Wisla and Motlawa. Hugo Sanders visited the Gdansk June 2019 conference to exchange his knowledge as a civil engineer and director developer of IJburg Amsterdam. He phoned my telling his first experiences; and step by step his respect growth for the local Polish people working on their city and its resilience under difficult circumstances. First; the municipality and university are different worlds in between exchange of knowledge is hampered; secondly the city lacks budget for speeding- up creating solutions. In the meantime, construction of new housing near the river and seafront continues. Site visits were made; architecture solutions and impressions were discussed. Too soon for the SOS Waterfront program to work on combined insights; but they will come.

In May 2019 Roselieke Pijl, a scholar and soon a student, started to fill in the CPONH Back-office. She has a lot to do, for instance arranging the website, making the secondment travel support programs; and controlling the budget expenditures. She is not alone in this; the whole team will help her in working together. Hugo Sanders’s visit was the testcase and now she can work-out the lessons learned; to make better plans for the secondments coming. She is easy going and a sharp thinker. She can be consulted with questions from inside and outside the CPONH travelling team.

The SOS Waterfront program is about exchanging knowledge by visitingother’s cities, for reflection of each other’s work in progress and aspossible start for new work initiatives, on the subject of seawater-level rice and what that does to cities and their citizens.

Central for reaching this general goalare the ‘Secondment’ visits wherebyresearchers and managers of respectively academic and non- academic organization based in these cities, visit each other during period of weeks, to give the others and themselves the chance speeding-up results.

The workshops and conferences therefor give creative moments to meet others; for understanding each other better and pushing reflection for bringing each other’s personal work on a higher level.

ULHT University asked CPONH to participate in the SOS Waterfront H2020 research program; because of its expertise in bottom-up initiatives in the most well-known ‘polder’ area called ‘Noorderkwartier’ in theNetherlands. The area is on three sites surrounded by water; what makes it worthwhile studying the state of resilience with the other program partners.

Want to join the discussion?
Feel free to contribute!